5 minute read. Note: We are currently in Spain, although this post is about Vietnam. //

Heat is the defining feature of Vietnam in June. We had thought Hanoi was hot until we reached Vinh City, or rather a small agricultural town an hour west of Vinh, close to the border of Laos. The train journey itself was sticky as, although the carriage had air con, all the doors and windows were open to the oven outside. But then we arrived and realised how cool the carriage had been.

The town itself was too small to warrant an entry on Wikipedia, and even the province only received a few sentences. Its infrastructure, however, was exceptional with many street lights and broad boulevards, dusty yet new. And baked solid by the sun. To avoid the heat, breakfast was at 7am, lunch at 11, and then a magic act transpired: the thrumming, bustling, hopping market town emptied, people vanishing like water on a griddle. No one, not even a dog. The shops with air con remained open, though it was more to keep the employees cool as no customers existed between noon and five. Well, apart from us, two sweaty, red foreigners communicating with sign language and smiles. As they say in Penang, ‘only mad dogs and Englishmen venture out into the noonday sun’…but perhaps the phrase is Frenchmen in Vietnam? But we’re not French…hmm. I digress. 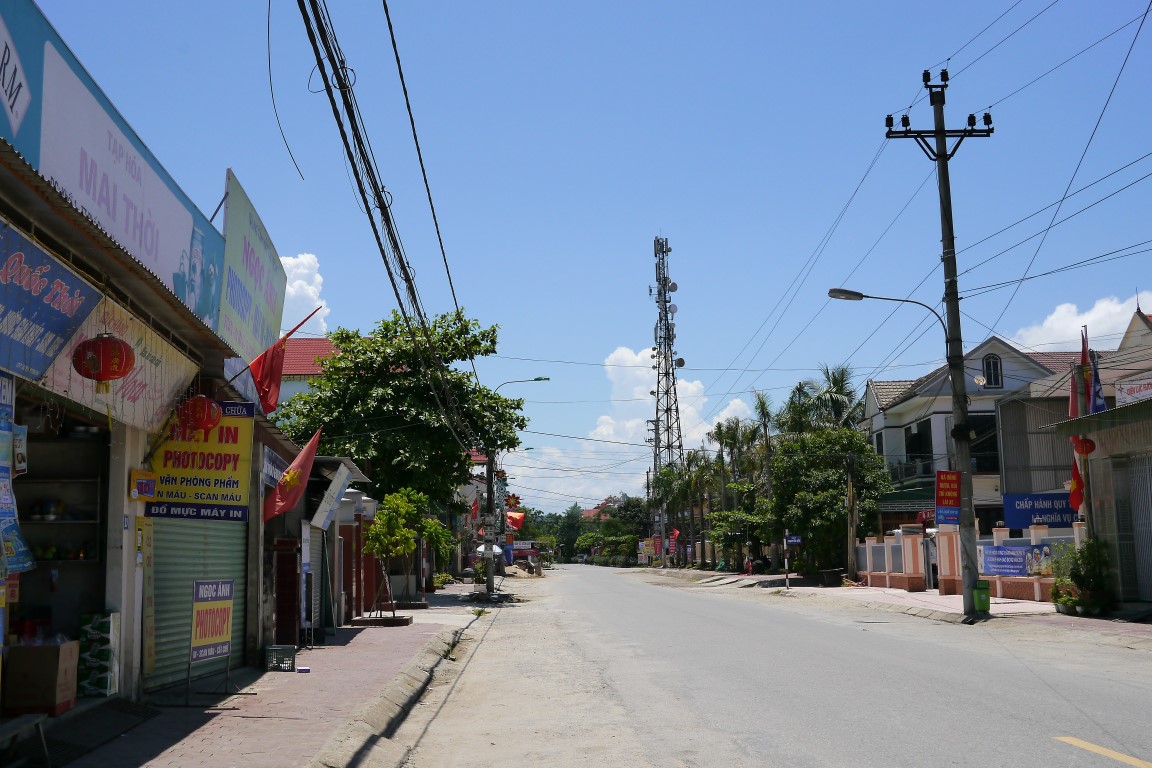 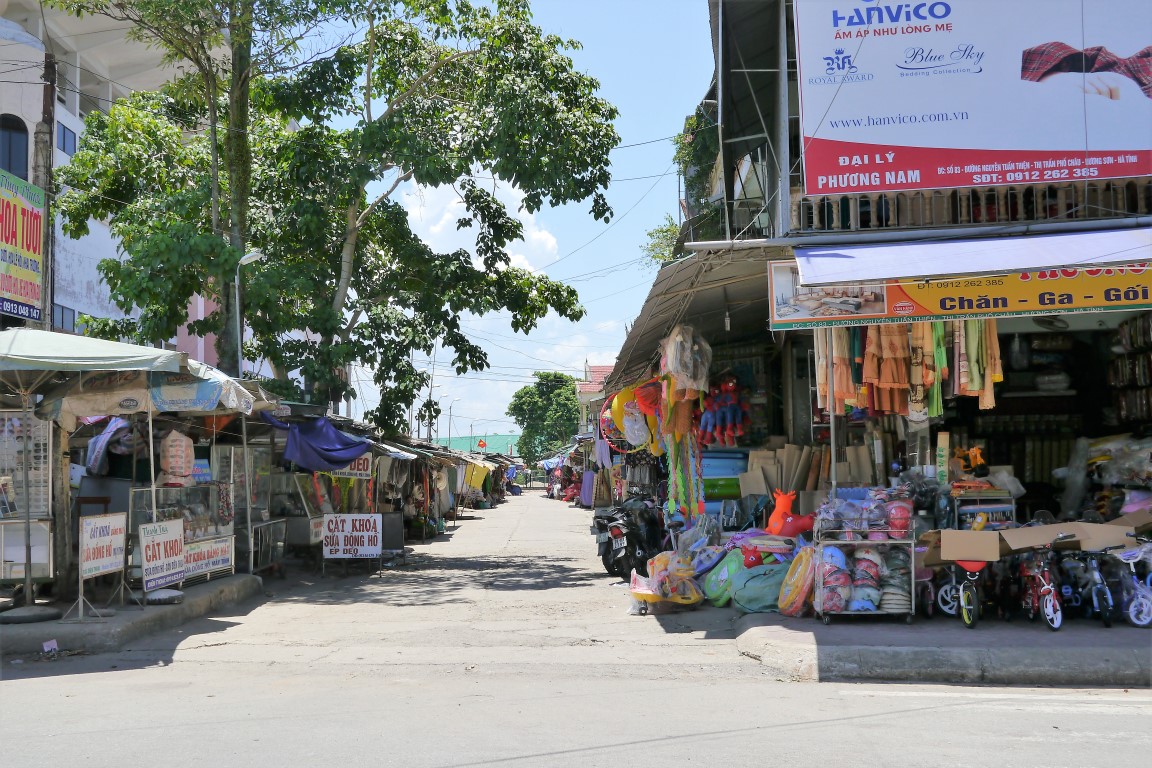 [ Caption: The high street and the market, completely quiet between noon and 4pm ]

In the evenings the town would re-blossom as the summer’s heat lost its edge, becoming a golden glow that infused the dusty air like a champagne mist. The ideal time for aimless strolling and an escape from our hotel room which we had been trapped in since lunch. Although it was a cool and bright room, our windows were stained glass or covered with wooden shutters, meaning that staying inside too long created a disconcerting feeling of isolation. The only other guests in the hotel were lost cyclists who always checked out in the morning, so the halls were hot, still and timeless. (Side note: every single one of the ten hotel reviews on Booking.com was written by a lost cyclist.) Therefore, when the heat started to break, it was time to head out and remind ourselves what the sky looked like.

[ Caption: The sky and clouds one evening as we emerged from our room for dinner ]

Our hotel came with a dog, a heavily pregnant yellow lab named Lucy. She was fiercely loyal to white people according to the manager, and especially women, and completely ignored anyone she deemed to be Vietnamese. The hotel owner guessed it was due to the amounts of loves and pats Lucy received from these rare pale lady cyclists (or pink lady? Or is that an apple? Or a drink? I digress again). Which meant that Lucy became ours for four days.

Each night, after we’d gone to bed, she would fetch our sandals from the shoe rack in the lobby and curl up with them, her nose in mine and her front paws on Vien’s. She never chewed them, but she did give them thorough cleanings with her tongue. She ignored everyone else’s shoes.

Whenever we headed out, she would follow us, sniffing a bit ahead or a lagging a bit behind and then waiting or waddling until we were all together again. One afternoon, as the heat was breaking, we took a multi-hour wander, heading out at 3pm before the town had revived; we were desperate to leave our isolated room, regardless of the heat. Lucy heaved herself up and trundled along, tongue lolling. We turned back to make her stay, and she wagged her whole body and resumed following us. Nothing for it but to continue and hope she would surrender after a few streets. She helped us buy some fresh tea and greeted a few neighbour dogs, and she stayed right between us crossing the wide intersection. As we explored the market, we encountered many intriguing smells that had Lucy sniffing like a bunny, passing conical heaps of fresh lychees, plums and peanuts ready to be steamed. 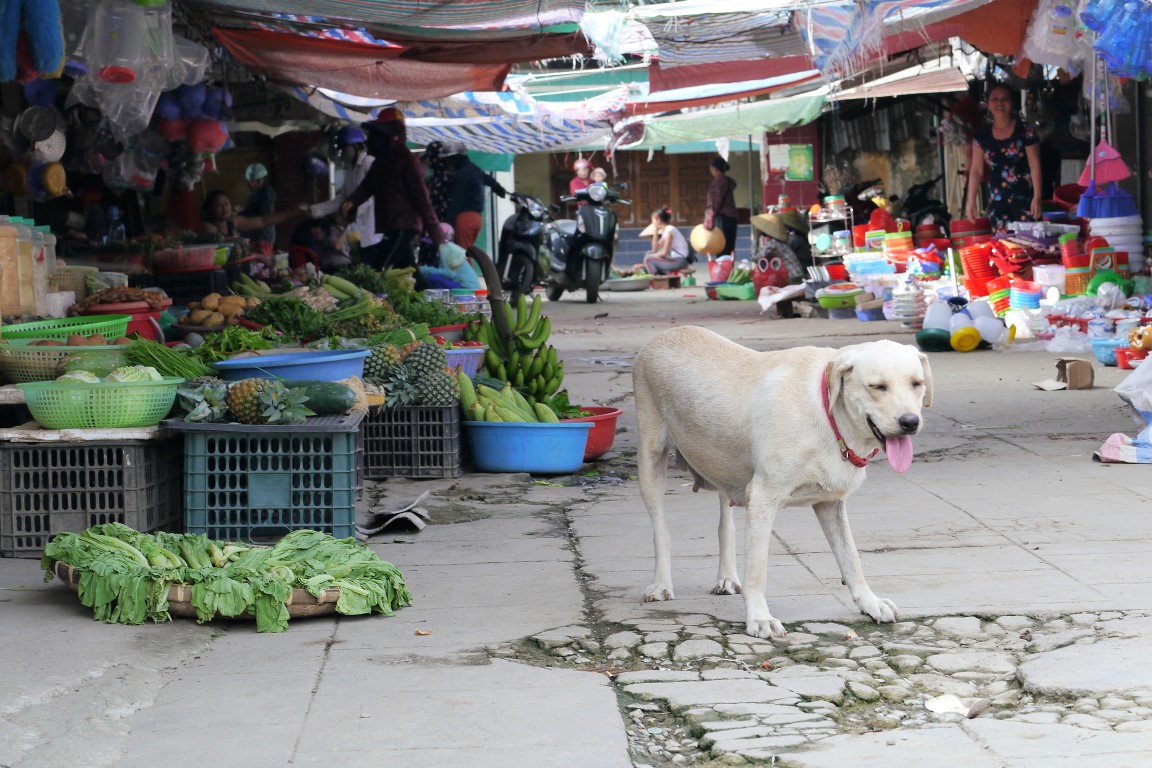 [ Caption: The market, waking up and ready for investigation by Lucy ]

The harvest was here and it was time to bring in everything from the fields: the hay, the fruit, the vegetables. To assist, the Vietnamese government had deployed 1000 police from Hanoi to this village to help the farmers with the harvest, as happens every year all across the country. We met one policeman over coffee: 20 years old, from Hanoi, proud to be helping his people by working in the fields for three weeks. The communal spirit alive and well. Of course, they are still police, so although these police-cum-farmers were either wearing sturdy clothes or were shirtless, they still needed to wear their helmets. It roasted his head but he did look quite stylish (also due to his Canadian t-shirt full of mystery slogans).

After the market, we started to cross the territories of dozens of dogs, all of whom came out to stake their claim with barks and growls. At the back of the market was a path down to the river and we walked straight into a group of five rough-looking mongrels who didn’t care that Lucy was a dozy pregnant lady. They surrounded her, lips peeled back and stained teeth looking sharp; Lucy rammed her tail between her legs and looked at us dolefully, waiting for us to intervene. Then the dogs leapt at her, biting and knocking her to the ground. Some vendors came over and our combined stamping and shouting ended the short fight and Lucy happily trotted after us, maybe not entirely worry-free. The mongrels continued growling but were too hot to run in pursuit.

At the river’s edge, Lucy plunged in and immediately lay down, cooling off, lapping briefly and keeping a weather eye on the cows grazing along the banks. The water was slow and deep, wending its way from Laos deeper into Vietnam, with its placid surface mirroring the evening sun and distant mountains. The town had turned its back on the river resulting in broad banks of grass and sedge, wide green flood plains, and lovely sand and gravel bars across its width. Fish broke the surface with their noses, bug-hunting, and a heron on the far side ignored us with great care. No cars except on the distant one-lane bridge, a few cow herders in the distance, a sandy track leading down to the water’s edge for easy drinking. Happiness is a healthy river and a wet dog on a summer’s evening. 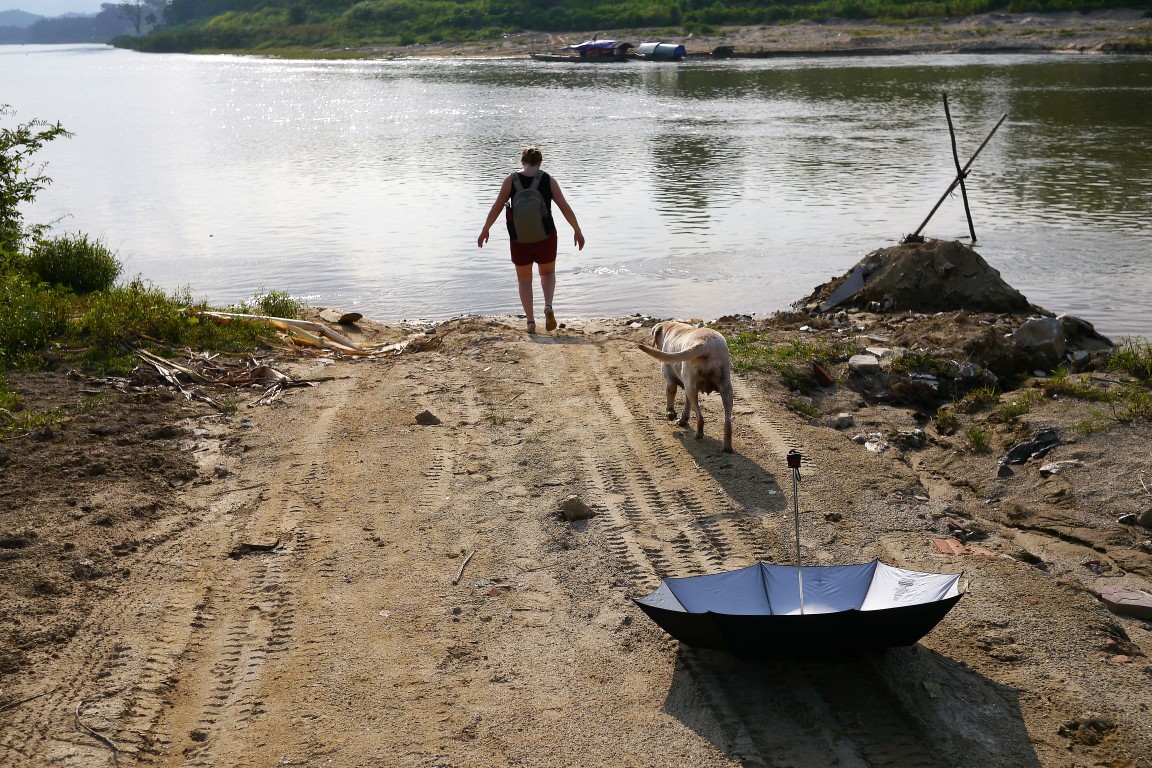 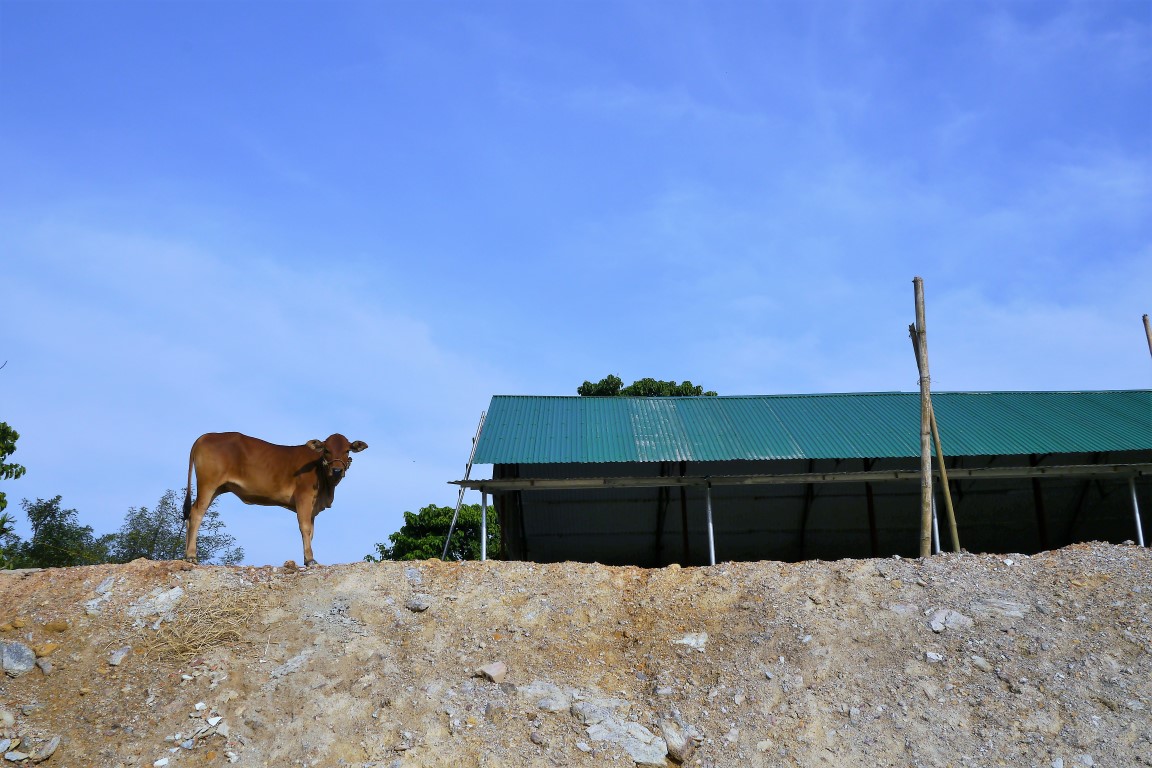 [ Caption: The river, abandoning our umbrella for a moment, and a curious cow ]

As we continued our walk, we learned that Lucy cared not for private property and trusted us to apologise on her behalf. She went straight into a large church and flopped down with relief. When we attempted to pull her by her collar, and then physically slide her out, she lay down and wagged her tail. So happy, so obstinate, so heavy. The Christians setting up the alter at first were a bit annoyed, then started giggling when they realised she wasn’t our dog and she had no intention of leaving God’s house – the tile floor was too cool.

We finally decided to abandon Lucy to the Christians, and she appeared at our heels about 15 seconds later. We offered her water in a plastic bag, which she gulped for a moment and then splashed everywhere with too much ebullience. Clearly plastic bags were too lowbrow for Madam Lucy.

[ Caption: 'I won't drink from this rubbish, but I still love you' ]

Stopping for an early dinner of the most beautiful pho we’ve ever had the good fortune to taste, Lucy sauntered in and flopped down by a fan, too hot to even investigate their rubbish bins. We mimed a bowl of water for ‘our’ dog and the bemused but willing staff offered her a big bowl of water at the same time they served us warm beer with ice. By that point, we had been walking for three hours and Lucy was finally offered water in a container that met her standards.

After dinner, we began the long walk home but Lucy was rejuvenated. Whenever Vien was more than twenty metres behind me taking photos, Lucy would trot back and forth between us and whine piteously until I stopped to wait. Once we were back together in a tight group we could set off again. At last we returned to our hotel’s street and there was a wedding party in full swing, with food scraps on the ground. Confident we could find our way home from here, Lucy headed off for a dinner of ‘street food’ without even a backwards glance. In the morning, though, our shoes were safe and sound in her bed. 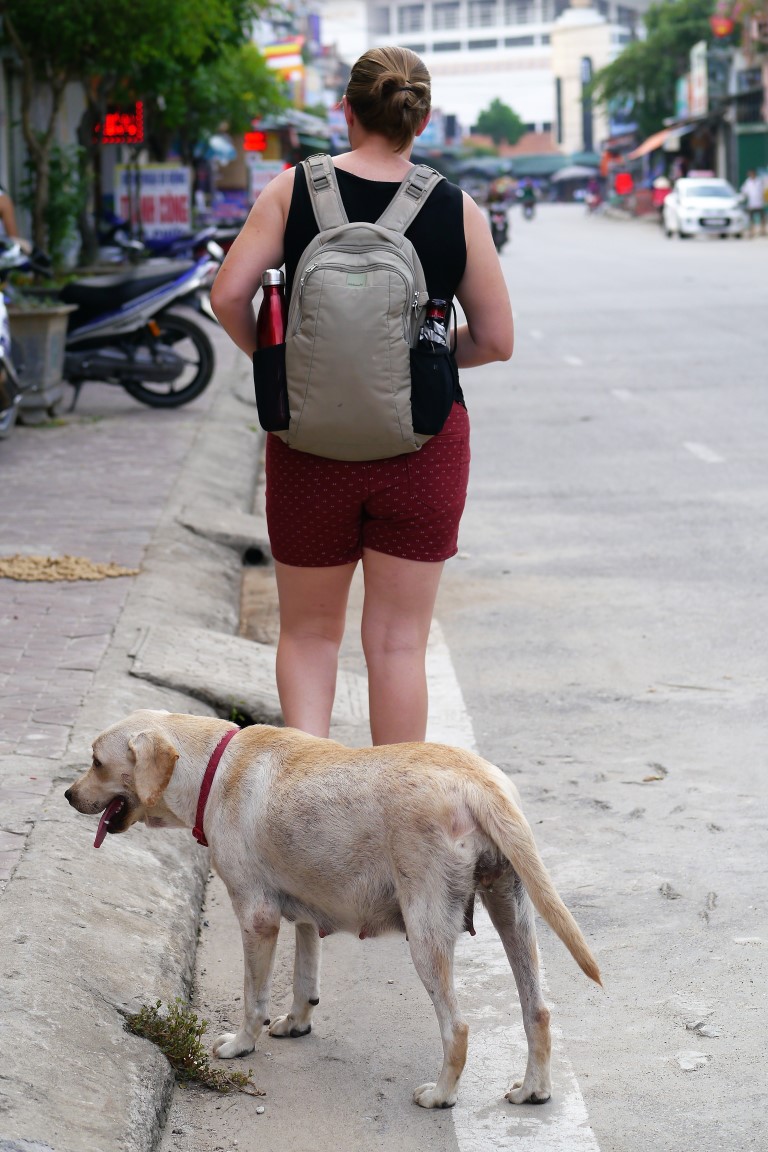 [ Caption: Tough work for Lucy - why do these hoomans keep walking so far apart?! ]

The next day, Lucy joined us on our walks to breakfast and lunch, and then heaved herself all the way to the bus ‘stop’ (an anonymous parking area). She sat waiting with us for our night bus to Da Nang to arrive, sniffing our luggage and wagging her tail. She ensured we stayed close together, too. While waiting, we asked our hotelier (who had organised our tickets, knew the bus driver, and would show us where on the side of the road the bus would stop) what would happen to Lucy’s puppies. With a grin, he said he would sell them, for lots and lots of money. She was the only yellow lab in the farm town, and everyone was very interested in having her bloodlines give some class to their mongrels. Our thoughts flashed to the market dogs of the day before – they could certainly use some of Lucy’s charm.

As we eventually boarded the bus and traded debilitating heat for frosty air con, we peered out the window and saw Lucy watching us with adoring eyes. What a pleasure to imagine: there will be a lot of little Lucys trotting about next time we visit.

Note: If you are travelling around Vietnam and would like to visit Ha Tinh province to see its agricultural heartland, contact us and we can put you in touch with some very kind and helpful people in this little town of Huong Son. :-)